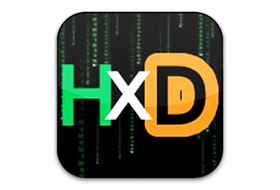 HxD is a carefully designed and fast hex editor which, additionally to raw disk editing and modifying of main memory (RAM), handles files of any size.

The easy to use interface offers features such as searching and replacing, exporting, checksums/digests, insertion of byte patterns, a file shredder, concatenation or splitting of files, statistics and much more.

Editing works like in a text editor with a focus on a simple and task-oriented operation, as such functions were streamlined to hide differences that are purely technical.
For example, drives and memory are presented similar to a file and are shown as a whole, in contrast to a sector/region-limited view that cuts off data which potentially belongs together. Drives and memory can be edited the same way as a regular file including support for undo. In addition memory-sections define a foldable region and inaccessible sections are hidden by default.

Furthermore a lot of effort was put into making operations fast and efficient, instead of forcing you to use specialized functions for technical reasons or arbitrarily limiting file sizes. This includes a responsive interface and progress indicators for lengthy operations.

* Exporters:
• New: skip undefined or unreadable sections, such that Intel Hex and S-Record files can be created that have gaps
• New: source code exporter option to set the maximum text column or bytes per lines (= array elements per line)
• New: SRecord and IntelHex exporters can now have maximum of 250 and 255 bytes per line, respectively
– therefore there is also a new default block size/bytes per line setting for each of the exporters, which have a more common size of 32 (for both)
– allows user to select very large block sizes, yet default to a commonly used size

* Importers:
• New: Intel Hex and S-Record support undefined regions of arbitrary size, by creating undefined foldable regions, instead of creating zero filled blocks for them
• Enhancement: rewrite logic to allow for data records that are out of order (addresses aren’t strictly increasing), or overlapping, even when there are gaps of undefined data; previously this could lead to errors, or would only function without undefined data gaps
• Enhancement: Intel Hex and S-Record importers ignore leading and trailing whitespace in a line

* Checksums / digests:
• New: custom checksum
– can generate a checksum, with settable bitwidth for the checksum result, the checksum addends, and the endianness
– useful for various exotic formats, such as ROM files

* Search window:
• Enhancement: added support for (U)Int24
• use same code as datainspector to convert from string to integer
• improved the naming of floating point and integer types (closer to data inspector)
• searches for both signed and unsigned integers, choosing the right type depending on which fits best (negative numbers => negative type, positive numbers => unsigned type; this is ok, because the positive numbers in the signed type have the same encoding as in the unsigned type; this is a feature of two’s complement encoding of integers)

* Tool windows:
• New: menu items and shortcuts to activate and cycle through tool windows
– activates (and shows when hidden) either of: data inspector, checksums, or search results
– implements MRU logic for activation (like Alt+Tab in Windows)
– can be canceled (and originally activated tool window will be restored)
– can handle dockable panels, pagecontrols, and childs of those to handle and keep track of activation
– properly handles switching between back and forward cycling, by switching from Alt+F7 to Alt+Shift+F7, and interrupting cycling when pressing another shortcut
– extended shortcut handling of VCL/Delphi to handle repeated uses of two shortcuts as part of a shortcut sequence, to properly implement MRU handling, and canceling sequencing (which restores the originally activated tool window), or committing the last chosen tool window, as the activated one

* PasteFromClipboard:
• do not delete then insert data in pmOverwrite mode, instead, only overwrite
• also ensure selection/caret is restored, and therefore always begin a group if selection is available

* Extensive work to support undefined sections in hex editor that can be deleted, or overwritten, all with undo capability; concerned a lot of supporting internal data structures/algorithms
• allows for support in importing and exporting files with gaps (=undefined sections)
– allows for round-trip handling of Intel Hex or S-Record files

* Settings:
• Data type converters only store their friendly type names in the settings/INI file, when the user changes them
– this allows for updating those names from version to version, and having them appear automatically without resetting the data inspector in the options
– also useful for translating HxD, which read the names from the settings when not resetting them, making it appear the translation is not complete

* Fix: entering positive numbers for (U)Int64 results in an out of range error message
* Fix: Search window: “any” bitwidth does not accept positive integers >= 2^63 (since it was limited to signed numbers only, now supports unsigned ones, too)
* Fix: HxD would sometimes not detect it was installed (and not in portable mode), because of a case sensitive path comparison
* Fix: access violation when deleting sections (sections were fixed before, so this bug never triggered)
* Fix: custom checksum computation uses wrong step size to advance in the byte stream it processes; it would advance in steps of the final checksum’s bitwidths, instead of the addend’s bitwidth
* Fix: when overwriting one nibble (key press in hex column) in unaccessible data, set the other nibble to 0 automatically
* Fix: dockable panels could change fonts in docked and undocked/floating modes
* Fix: several type and pointer shorting issues, due to types not compatible with x64; they would cause hard to track bugs in the x64 version of HxD under certain versions/configurations of Win 10 (ensuring everything is allocated in memory above 4GiB, during testing, allowed to track them down)
• issues were in some own code, some third party code, and some Delphi RTL code (TRttiContext, TValue.Make)