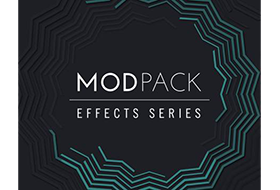 CHORAL: CLASSIC CHORUS AND MORE
CHORAL takes sonic inspiration from some of the most prized chorus effects of the last 40 years – including iconic rack-mount and synth-based ‘unison’ effects. Add width, movement, sheen, and shimmer to any signal, or take advantage of an all-new feedback mode, Scatter. It avoids the unpleasant metallic quality of heavy feedback settings in traditional designs, instead creating an entirely new reverb-like effect.

IN THE MODE
CHORAL has four sound modes, each with a distinct character.
UNIVERSAL offers a clean modern digital sound, while three are inspired by classic hardware choruses.
SYNTH mode takes its sonic lead from a series of 80s synthesizers, famous for their lush ‘unison’ chorusing function.
ENSEMBLE mode is reminiscent of the BBD (bucket brigade device) chorus section of one of the most prized string synths of the late 70s.
DIMENSION references the sound of a truly legendary early 80s rackmount chorus.

CHORUS CONTROL
The unifying factor of all the classics that inspired CHORAL is that they featured little, if any, customization options. On, Off, and Type, were typically the only controls. CHORAL, on the other hand, offers many custom parameters.

The number of chorus voices can be set progressively from one to three, the sync rate can be manually altered, as can the modulation rate, amount, mix, delay time, stereo width, and feedback (the latter offering an entirely new routing option, called Scatter).

FLAIR: A NEW TYPE OF FLANGER
FLAIR turns the classic flanger on its head. Not satisfied simply recreating vintage analog tape and pedal flanging effects – though it does both beautifully – FLAIR adds a revolutionary new Voices mode which uses multiple delay lines to create tuned harmonic flanging layers and resonances. It even features 24 chord settings, offering a variety of chords and note intervals.

A POWERFUL TRIAD
FLAIR offers three modes.
In Standard mode, each voice behaves like a normal flanger.
In Thru Zero mode, each voice is duplicated at its respective pitch, but the duplicates are not modulated, so as the modulation increases, the flanging becomes even more apparent.
In Scan mode, things get even more creative: Instead of stacking the voices into a chord, they play consecutively, a bit like an arpeggiator, with the order set by one of three waveforms.

CAPABLE CLASSICS
In addition to the revolutionary features on offer, FLAIR is capable of traditional lush tape and pedal-style flanging, offering all the parameters you would commonly expect, such as tempo-synced pitch modulation.

Sound-enhancing features include Detune for offsetting the pitch of the flanging, Feedback for thickening the flanging (complete with adjustable damping control to roll off high frequencies and soften the effect at high feedback values), and Width, for creating stereo flanging.

NOT JUST ANOTHER NOTCH
Though offering a lush, analog-inspired sound, reminiscent of some of the finest rackmount and pedal-housed phaser effects, PHASIS’ unique Spread control allows wah-wah and formant-style filtering effects, but with a highly distinct sonic flavour.

Spread adjusts the density of peaks and notches in the spectrum, and whether set to a single value, controlled live or with automation, or flipped with the Invert button, Spread provides a fresh take on both phasing and vowel-filtering.

ULTRA FEATURES
With up to 12 notches, a powerful stereo spread function, extensive tempo-sync options, and all the controls you would expect on a professional phaser, PHASIS is already a formidable modulation device, but ULTRA takes things to new territory.

Engaging ULTRA raises the maximum modulation speed from 8.37kHz up to an incredible 477.3kHz allowing some extraordinary FM-style effects that have never been heard before, capable of transforming even white noise into an exciting sound.

Thanks to Team R2R