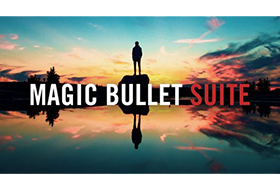 Magic Bullet 2023 adds the recently released Halation and Diffusion tools to Looks in Cinema 4D. Powerful enhancements to the Looks Cinema 4D workflow in the recently released OCIO mode have been added. The Looks integration into the Unreal Engine 5 now works flawlessly. Furthermore, Denoiser is now available for Final Cut Pro and compatible with M1 machines.

Color Correct
Magic Bullet Suite 13 gives you everything you need to make your footage look great, right on your editing timeline. Balance out your shots with powerful color adjustments that work the way your eye expects them to. Then, go beyond color correction, with accurate simulations of lens filters and film stocks. With Magic Bullet Suite, you’ll have the most powerful and intuitive real time color correction tools available, without ever needing to switch to a different app.

Stylize
Give your footage the look of a Hollywood film. With the tools in Magic Bullet Suite, your footage can instantly have cinematic contrast and the sophisticated color palettes of big budget movies. With tons of fully customizable presets based on popular movies and TV shows, you will have beautiful results in seconds.

Cleanup
Save your footage from video noise caused by shooting in the dark or at high ISOs. Magic Bullet Suite can clean up the noise while still preserving the details in your shot. At the end of your color grading process, Magic Bullet Suite can also reintroduce some subtle texture and a natural film grain that gives your final product a look that feels genuine and unprocessed.

Adobe Compatible
The tools in Magic Bullet Suite are compatible with Adobe Premiere Pro, After Effects and more

Magic Bullet Renoiser 1.0
This is an entirely new product that gives your footage a cinematic texture and grain. Whether you’ve denoised your video, created CGI and motion graphics compositions, or even shot on a camera that produces virtually noiseless footage, Renoiser’s all-new, realtime, GPU-accelerated grain engine rebuilds your footage with with a cinematic texture more genuine than anything you’ve seen before. Renoiser is fully-customizable, and Includes 16 noise/grain presets based on real film stocks and popular movies, such as 16MM, 8MM and much more.