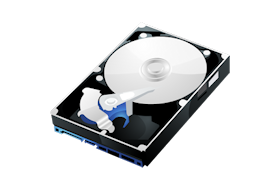 SpinRite is a stand-alone DOS program designed to refurbish hard drives, floppy disks and recover data from marginally or completely unreadable hard drives and floppy disks and from partitions and folders which have become unreadable. Did we just say DOS? Yes. There are certain things you really can’t do properly in Windows. The explanation is that while the operating system is running it’s very difficult to get access to hardware and systems which function ahead of theoperating system. So using SpinRite requires a reboot and once you do that, a whole world of data recovery and long-term hard drive maintenance opens up to you.

SpinRite 6 interacts directly with magnetic storage media at a level below any installedoperating system . This version is able to operate on all Windows XP NTFS formats in addition to all DOS FAT, all Linux file systems, Novell, Macintosh (if temporarily moved into a PC) or anything else.SpinRite can also be used to repair and recover the hard drive from a TiVo personal video recorder. SpinRite originally introduced the concept of non-destructive low-level reformatting and sector interleave optimization all of which basically means that the software can read, analyze, correct then rewrite every tiny bit of data on ahard drive , re-establishing the formatting, without losing any original data, without screwing up your files (they’ll work better actually) or messing up your partitions (they’ll work better too), or fouling up the factory low-level formatting of any hard drive. SpinRite has been under continuous development for 16 years (since v1 in 1988) and is probably the most popular disk data recovery tool on the market today.

What SpinRite is not is a file undelete or defragmentation utility. If you’ve ever encountered inaccessible drives or partitions, folders that won’t open and drives or folders containing corrupt files, you need a tool likeSpinRite. We set out to prove SpinRite 6’s effectiveness by tossing it into the data recovery ring with the rest of our drive and data maintenance tools. Note that we usedSpinRite in our research offices from v3 through v5, until we upgraded all of the network to Windows 2000 NTFS formatting a few years ago. The release ofSpinRite v6 is welcome indeed because it fully addresses NTFS formatted drives (which was about the only thingSpinRite 5 couldn’t touch).

When you boot into SpinRite it does a general drive analysis and checks whether or not Self-Monitoring, Analysis and Reporting Technology (S.M.A.R.T.) has been turned on in the system BIOS. This technology is able to predict up to 75% of all hard disk problems, but to constructively use the information S.M.A.R.T. produces you need software (such asSpinRite 6) which can retrieve the data from the disk for analysis. But SpinRite ‘s real power resides in its own complex statistical analysis technology, called DynaStat, to work some real data recovery magic on drives which would otherwise be complete junk.SpinRite ‘s proprietary design is as simple to use as anything we’ve ever seen—no typing, no command lines, no complex or technically opaque configurations—with just a few key presses required to start the program and select the actions you want it to perform.

For the uninitiated, a few drive technology definitions are in order. First and foremost it’s important to know that everyhard drive contains thin, round, hard platters, spun at high rotational velocities. Floppy disk platters are, well, thin and floppy and made of acetate plastic. Both kinds of platter surfaces are coated with microscopically tiny magnetic particles. Remind you of something? All those who said “magnetic recording tape” take a bow. In fact, storage technology has advanced not because of changes in fundamental theory (those changes are coming over the next few years mind you) but because of advancements in the type, physical amount, density and consistency of magnetically coercible platter coatings, because of the advancements in design of the drive heads which are used to read and write data to the exotic coatings, and because of the incremental improvements in drive motor and bearing technology which have enabled faster rotational speeds and controlled operating temperatures. If nothing else external happens (unusual cold, excessive heat, physical damage) and if the drive is turned off with the computer every night, under normal use a typicalhard drive can theoretically last for a decade. The problem is that the drive surface coatings develop inconsistencies, data is incorrectly written from time to time, physical bumps & bangs take place and excess heat takes its toll on drive electronics. The fallacy surroundinghard drive problems is that once the drive starts throwing errors all over the place, it’s time to replace it. That’s not true most of the time. As a matter of fact, more often than not if the drive is not making unusual noises and if you haven’t actually burned out any of the drive electronics, the balky old thing may just needs some tender loving care. That’s whereSpinRite 6 comes in.

We prepared for the first data recovery task by installing SpinRite in its own unique way. Normally, you install new software on a hard drive, but SpinRite operates in a completely different manner. The SpinRite 6 installer gives you the choice of creating a bootable DOS floppy diskette or a bootable CD-ROM. We made one of each. The diskette is simple—the installer does all the work for you. Creating a CD-ROM requires that you have a CD burner in the computer along with some sort of CD burning software. No files are installed anywhere on yourhard drive—there aren’t even any Windows Registry entries. The whole installation is perfectly self-contained. SpinRite is a tiny program, written in Assembler.

There are a total of 5 data analysis and recovery settings in SpinRite: 1) Examine the Surfaces – provides a complete report on the drive’s health; 2) Recover Unreadable Data – uses Gibson Research’s proprietary tolerance & recovery routines to fully rewrite the entire disk, analyzing and correcting surface errors and recovering data along the way; 3) Refresh the Surfaces – completely reads and rewrites all disk data bit by bit, twice; 4) Locate Surface Errors – reads all data twice, flipping bits from 1 to 0 and back again while fully recovering areas already marked as bad; and 5) Restore Good Sectors – reads and rewrites the entire disk bit by bit and fully restores previously unusable areas of the drive.

The opportunity for the first test appeared only one day after we received our copy of version 6. An 80GBhard drive on one of our busy storage servers decided to pack it in. Prior to trying SpinRite we were still able to access the drive intermittently but it was impossible to copy data or run a file undelete utility. A handful of important files had been written to the drive subsequent to the last backup the previous night; files which we needed within about 48 hours, which meant that a professional data recovery service (with its three week backlog) was out of the question. We removed the drive and installed it in an identical hardware configuration, then bootedSpinRite 6 from CD and did a Level 2 recovery (see above for recovery level definitions). After 22 hours, SpinRite completed its work and pronounced the drive fully recovered. We reinstalled the drive in the original server. It ran perfectly, the research assistant who had created the required files copied them off the drive and that was that. Nice jobSpinRite 6. The drive was still running fine as we went to publication with this review two weeks after the incident. We used a level 2 setting inSpinRite: Recover Unreadable Data.

Don’t confuse SpinRite with Microsoft’s ScanDisk. ScanDisk’s so-called surface scan only verifies that a drive’s sectors can be read but does nothing to verify that they can be written or that data which is written can be read back. If ScanDisk can’t read a sector it simply marks it as bad and moves on. Rather than giving up when a sector can’t be read, or rather than accepting only the data a drive might be able to initially yield, SpinRite’s DynaStat system accumulates a comprehensive statistical database about the behavior of any individual sector’s data through the accumulation and classification of up to 2,000 individual sector re-reads. By understanding the unlock/re-lock behavior of the drive’s data-to-flux reversal encoder/decoder, and by processing the sector’s data ‘tails’ after encountering a defect of any kind, SpinRite ‘reverse engineers’ the sector’s original data from the statistical performance profile of the unreadable sector’s flux reversals. The result is most often complete recovery of data that would otherwise have been utterly lost. Our experience is that running SpinRite every two or three months on all our machines has always kept them running smoothly and prevented all sorts of data loss problems. SpinRite is technically complex, all the more reason to be thankful that its configuration choices are severely constrained for end users.

Cons: Picky, picky picky about floppy disks – we went through 5 disks before finding one that SpinRite 6 would format and set up as a boot diskette. Clean, freshly formatted, name brand diskettes only please. The software requires time—lots and lots of time—which is not strictly a Con but rather more of a warning because this kind of superb data recovery simply cannot take place quickly due to the inherent limits of the hardware, magnetic media and the complex nature of the algorithms used to do the actual recovery. The UI could use a little tweak because the initial recovery level selection screen may fool you into thinking the software only offers level 2 & 4. You have to go into the settings menu to change recovery levels.

Pros: We tried it on an ancient 386SX box containing an old, cranky 60MB(!?) Quantum IDE drive which, after running SpinRite, now has no bad sectors and was finally made accessible enough to copy off some valuable documents which we thought were lost forever. SpinRite ran as well on the old machine as it did on the latest Core 2 Duo and dual processor Xeon screamers. Automatically turns on S.M.A.R.T. in your BIOS (make sure you boot int0 the BIOS afterward in order to permanently turn on S.M.A.R.T). Safe and secure as we found after checking the 9th or 10th drive without a single glitch, lockup, crash or indeed anything else other than rock solid stability, which means that SpinRite is fully focused on solving problems rather than adding difficulties of its own. If you use hard drives (I think that means all of us), if you’re in IS/IT, or if you’ve ever wished for a comprehensive drive recovery and maintenance tool which doesn’t require a degree in mathematics to use, try SpinRite 6. The drives you save may be your own. Highly recommended.