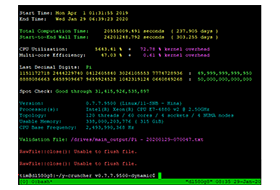 y-cruncher is a program that can compute Pi and other constants to trillions of digits.

It is the first of its kind that is multi-threaded and scalable to multi-core systems. Ever since its launch in 2009, it has become a common benchmarking and stress-testing application for overclockers and hardware enthusiasts.

Zen4 is set to be AMD’s first processor to support AVX512. You know what that means – a new y-cruncher binary for it!

AMD has graciously provided me a pre-release sample of their Ryzen 9 7950X. And using that, I’m able to produce a Zen4-optimized binary – well ahead of launch and in time for the hardware reviewers to pick up.

Since most information about Zen4 is still under embargo, I cannot say anything about it at this time. If you happen to have access to a Zen4 system, feel free to try out this new release.

If you are a hardware reviewer who uses y-cruncher as one of your benchmarks, you will need to grab this latest version of y-cruncher to get the best results on Zen4.

The existing Intel-optimized AVX512 binaries for Skylake and Tiger Lake do not run optimally on Zen4, so you will need the new binary. Fortunately, the performance of the other binaries remain unchanged in v0.7.10. So Zen4 benchmarks on v0.7.10 can be directly compared with those of other processors using y-cruncher v0.7.9. Thus you do not need to redo your benchmarks for competing processors if they are already done with v0.7.9.

Overall, this was a very fun project which I enjoyed. Being pre-release meant that all the usual optimization and architectural resources that I usually rely on do not exist yet. So I had to do all the reverse engineering myself to figure out enough of architecture to where I could optimize for it. Unless someone beats me to it (via leaks), I intend to publish my findings as soon as is allowed.

AMD’s support for AVX512 may be the trigger that finally breaks AVX512’s chicken-egg problem. For better part of the last decade, nobody used AVX512 because of poor support. And since nobody used it, it received poor support. Now with AMD’s backing, adoption of AVX512 may finally start to increase and perhaps put Intel at a competitive disadvantage until they bring it back to the consumer market.

This 18-CNL and 22-ZN4 Linux binaries in this release have not been tested.