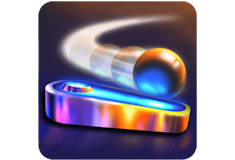 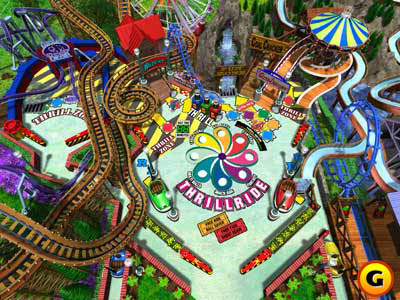 The last few years have been hard on PC pinball simulations. Just a few years ago, they were quite common. Companies like 21st Century Entertainment were devoted exclusively to replicating pinball on the PC, and other companies churned out simulated tables on a regular basis. However, these days there are really only two series that can be counted on: Empire’s Pro Pinball and Sierra’s 3D Ultra Pinball.

The two series couldn’t be more different. The Pro Pinball games are impressive simulations of fictional tables that render every flashing light, screw, and doohickey with a nearly obsessive attention to detail. On the other hand, the 3D Ultra Pinball games are, at best, pinball-like computer games that attempt to simulate how a pinball table would look and behave if it had to fit in the dimensions of your computer screen and wasn’t constrained to the confines of reality.

The newest entry, Thrillride, doesn’t break from the formula used for its predecessors Creep Night and NASCAR. Its amusement park theme harkens back to Williams’ Funhouse, though Thrillride opts for a sort of Disney family-fun quality that doesn’t quite compare to Funhouse’s creepy talking-dummy theme. As in all previous 3D Ultra Pinball games, Thrillride is a small table with lots of ramps and a small area off to the left that opens when you complete some tasks.

In the case of Thrillride, the tasks involve going on rides and visiting the snack shop. When you open the “thrill zone,” you must get the ball over to the left side of the table, where you must complete more tasks in a small, self-contained area. It’s a good idea, and Thrillride is certainly fun for a bit. Seeing the ball go over loops and ride down water flumes is cool, and the bonus tasks, appearing as if by magic on the table proper, are pretty fun as well.

There are also more substantial bonus games in which you’re taken to another screen altogether to play another pinball-like game to clear a river for some bumper boats or to build your own roller coaster by hitting buttons that determine its movements.

The graphics are suitable and colorful, though they aren’t nearly as detailed as in the Pro Pinball series. Likewise, the physics are fine, but not noticeably realistic. It’s clear that 3D Ultra Pinball is meant as nothing more than a fun diversion and not as a hard-core pinball simulation aimed at silver-ball fanatics.

And if Thrillride has a single problem, it’s exactly that. As a result, it is simply too easy. My first game lasted more than 30 minutes before I finally quit out, and I was only on ball two. The middle aisle is the only way to lose the ball, and the lack of a challenge makes the game seem a bit tedious. It’s no fun to feel as if you’ll see everything in the game on one play, which makes Thrillride not very enjoyable. With the exception of one particularly hard ramp, almost everything can be accessed just by constantly banging the flippers. Eventually, you’ll hit your goal and get the reward.

Such criticisms might seem harsh in light of the fact that Thrillride clearly isn’t designed as a simulation. It’s a simple pinball game that’s just trying to provide some innocuous fun. And it succeeds to a degree, though the thrills are sporadic and the ride is a bit too short.