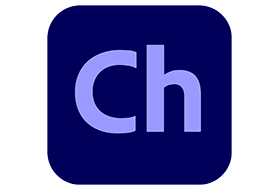 Adobe Character Animator 2022 will help you to create a 2D character and make it come alive. The software copies your facial movements so your characters act – and react – realistically.