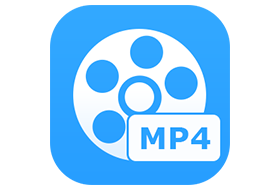 Convert DVD or Any video file to MP4 format
If you have some DVD discs and want to watch the videos of the discs on other devices, or convert videos of various formats to MP4, this powerful MP4 Converter can help you. You can even convert DVD or video to different devices-supported formats, such as MP4 for iPhone, iPad, iPod even Apple TV, etc. This allows you to play videos at any time on any device. It is very easy that you share your videos with others.

Compatible with numerous video formats and devices
This MP4 Converter allows you to convert video to all popular formats including MP4 format. For example, you can use this Converter to convert MPG, AVI, 3GP, WMV, MOV, M4V, MKV, MTS, TS, DivX, XviD, VOB, AMV, ASF, SWF, etc to MP4 Format. You can also convert MP4 videos to the above formats to make your videos compatible with various devices. After the conversion, you can enjoy the videos on iPhone, iPad, iPad, Apple TV, PSP, PSP, PS3, Sony Walkman, Zune, Samsung, Nokia, HTC, etc.

Apply various video effects to MP4 video
There are times when you want to adjust the video effects. For example, the recorded videos have the wrong direction or the videos look dark. In such cases, this powerful MP4 Converter can easily solve the problem. You can change the video effect like brightness, saturation, contrast, hue and volume with just a few clicks. You can also remove black edges of your video for better effect. If you like 3D film, you can add 3D effect. Watermark is also a practical feature. You can add certain font or image.

Customize profile settings of the MP4 video
If you only want one clip of the video, you can use this MP4 Converter to cut any video segment from source DVD or video file and convert the segment to MP4. The MP4 Converter allows you to combine different DVD titles/chapters and export a new single MP4 file. You can set video resolution, video bit rate, frame rate, video encoder, aspect ratio, audio channels, sampling rate, audio encoder, audio bit rate as desired.

MP4 converting with super fast conversion speed
Before you convert video to MP4, you can specify the effects in the preview window. If you like a picture of the video very much, you can make a snap shot with one click and then get the picture. For the conversion, the MP4 Converter has applied the latest NVIDIA CUDA technology and AMD APP technology, offering users surprising conversion speed. You can convert a maximum of 8 videos at once. This is why you can do other things after you click on “Convert”, which can save you a lot of time.

Thanks to bb2018 release