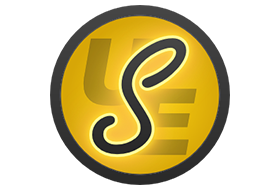 UEStudio includes all the features of UltraEdit plus native support for over 30 popular compilers (including Microsoft Visual C++, Java, GNU C/C++, PHP, Perl and over 30 others), an integrated debugger, integrated VCS version control, built-in class browsing, language intelligence (like Intellisense), project converter, and a batch builder… to name just a few of its advanced features. A significant element of a powerful IDE is a programmer’s editor or code editor. It serves as the core foundation of any IDE. UEStudio is built on the chassis of the renowned UltraEdit. As such, the program’s backbone is highly seasoned, stable, and already proven as the defacto standard of text and programmer’s editors.

Because UltraEdit is so powerful, many of our users already use it as an IDE and have provided us feature requests to extend that functionality. Together, we have taken those requests, our own ideas, and the concept of a supercharged IDE and produced what we consider to be a powerful application with new and exciting features such as native support for over 30 popular compilers, integrated CVS version control, built-in class browsing, language intelligence (like Intellisense), project converter, batch builder, and an integrated debugger to name just a few!

Special thanks to Radixx11 release