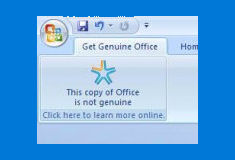 Recently Microsoft released an office update KB949810 know as OGA (Office Genuine Advantage) which once installed on your PC will refuse to uninstall. If you review your updates history, you will find “Office Genuine Advantage Notifications (KB949810) en-us” under Office 2003 or Office 2007 becuase your Automatic Updates were turned on. This update does not show under “Control Panel”, “Add Remove Programs” list even if you have tick “Show Updates” checkbox.

While non-genuine Microsoft products will face problems, it has caused many issues for official license users of the product. Microsoft says that this was a “voluntary Microsoft update” but you have no control to uninstall once it is installed.

With rampant software piracy occurring non-genuine Microsoft counterfeit Office products are distibuted worldwide and invisible OGA cop is out there to control them. While the intention is positive, paid fully licensed customers are facing massive problems. Many System Administratiors have cast their opinion on forums “My suggestion is to decline that update (KB949810) and not install it anywhere”