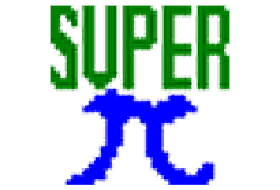 Super PI is a popular benchmarking software that calculates pi to a specified number of digits after the decimal point—up to a maximum of 32 million.