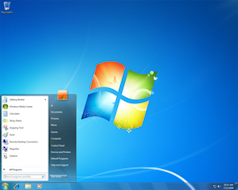 Windows 7 (formerly codenamed Blackcomb and Vienna) is the next release of Microsoft Windows, an operating system produced by Microsoft for use on personal computers, including home and business desktops, laptops, Tablet PCs, and media center PCs.

Microsoft stated in 2007 that it is planning Windows 7 development for a three-year time frame starting after the release of its predecessor, Windows Vista, but that the final release date will be determined by product quality.

Unlike its predecessor, Windows 7 is intended to be an incremental upgrade with the goal of being fully compatible with existing device drivers, applications, and hardware. Presentations given by the company in 2008 have focused on multi-touch support, a redesigned Windows Shell with a new taskbar, a home networking system called HomeGroup, and performance improvements. Some applications that have been included with prior releases of Microsoft Windows, most notably Windows Mail (formerly Outlook Express), Windows Movie Maker, and Windows Photo Gallery, are no longer included with the operating system; they are instead offered separately as part of the Windows Live Essentials suite.

Windows 7 – It’s the next version of Windows for PCs, and it’s the result of working hand-in-hand with our partners and with people who use Windows in the real world every day. We’re paying particular attention to the things they’re telling us are important to them and will make their PCs work the way they want them to – things like enhanced reliability, responsiveness, and faster boot and shut-down. We’re also trying to make their everyday tasks easier, like connecting and syncing devices, browsing the web, and managing a home network.

Of course, we’re also working on new capabilities, so people will be able to do things with Windows 7 that were difficult (or perhaps impossible) to do with PCs before. Finally, we’re working hard to ensure that Windows 7 will run on any PC and work with any program that works today with Windows Vista, so upgrading from Windows Vista will be easy.

According to reports sent to TG Daily, the Milestone 1 build of Windows 7 adds support for systems using multiple heterogeneous graphics cards from different vendors and a new version of Windows Media Center. New features in Milestone 1 also reportedly include Gadgets being integrated into Windows Explorer, a Gadget for Windows Media Center, the ability to visually pin and unpin items from the Start Menu and Taskbar, improved media features, the XPS Essentials Pack being integrated, Windows PowerShell Integrated Scripting Environment (ISE), and a multiline Calculator featuring Programmer and Statistics modes along with unit conversion.

Reports indicate that a feedback tool included in Milestone 1 lists some coming features: the ability to store Internet Explorer settings on a Windows Live account, updated versions of Paint and WordPad, and a 10-minute install process. In addition, improved network connection tools might be included.

The taskbar has seen the biggest visual changes, where the Quick Launch has been merged with the buttons to create an enhanced taskbar or what Microsoft internally refers to as the “Superbar”. This enhanced taskbar also enables the Jump Lists feature to allow easy access to common tasks.

The Windows 7 ISO images hosted on Digital River is genuine and official version, and the downloads from the server is legal. It’s after all one of the official channel where end-users who purchase a license (product key) for Windows 7 get the setup installation files.

Anyway, without a genuine and legally purchased product key, you can’t get Windows 7 activated, and Windows 7 will only run as evaluation copy for up to 30 days.

Windows 7 Product Key %100 Working
Windows 7 Product key for all version 32 bit and 64 bit. find below
But remember once you use these keys, do not update your operating system if you update your window 7 system it will be occur problem but this problem with some keys, most of keys are %100 working.