Imagine that all the coolest and most popular radio-controlled cars have come to life and escaped the store shelves. OK, maybe you’d better not. It’s a silly idea that feels unnecessary and tacked on in Acclaim’s new racing game Re-Volt. Fortunately, the game is better than its premise and delivers some memorable arcade racing thrills. On the other hand, Re-Volt has its share of problems and ends up being only decent when it could have been great. 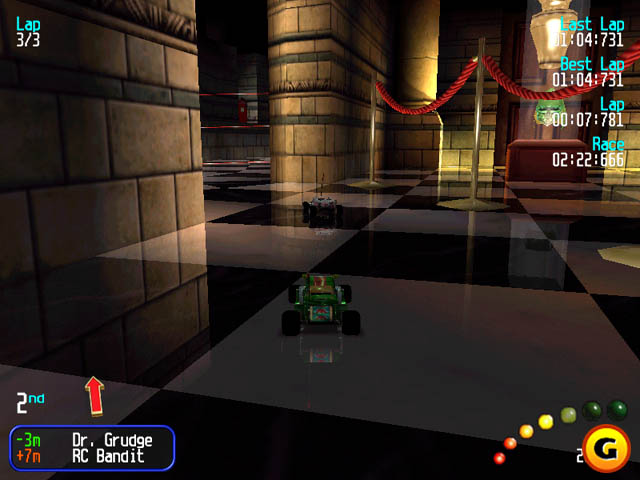 Strip away the bad premise, and the basic idea behind the game is that you race little radio-controlled cars around a series of cool and unusual tracks. Essentially, you get to drive these puppies where you wouldn’t be able to in real life. You have more than 28 different cars to choose from (each rated differently for speed, acceleration, and weight), though most of these are locked at the beginning of the game. As you progress through the game’s four championship circuits, you’ll gain access to more cars.

Tracks include the inside of a toy store, a suburban neighborhood, the deck of a ship, a museum, and a town in the Old West. In all, the game offers 14 single-player tracks including the stunt track, which is a free-for-all course on which you can try some slick jumps, loops, and other nifty maneuvers. If you manage to win enough races, you can also take on most of the tracks in mirrored or reverse modes. The game relies a little too heavily on this, however, and actually throws a mirrored track at you very early on. So instead of letting you race on a new track for each of your first 13 runs, you begin seeing familiar surroundings as early as your sixth race.

Fortunately, gameplay is pretty solid as far as arcade racers go. The game offers four different speed and realism settings, which govern how fast you can go and how harsh the physics are during each race. On the higher settings, Re-Volt can be extremely challenging, as it becomes remarkably easy to spin out your little car or, worse yet, flip it over to lose precious seconds. The lowest setting offers little relief, since it slaps a speed delimiter on your car but doesn’t seem to slow down your opponents at all once you progress past the first championship circuit. Actually, that seems to be a theme throughout the game, since even when you’re running flat-out with the fastest car available, the computer cars always seem to be able to pass you with ease. The AI also has access to different cars than you do at most points, which doesn’t seem very fair.

Still, if you can grasp the controls, you should be able to stay competitive in Re-Volt after a few races’ worth of practice. If you’re still having trouble, the various power-ups can help even the odds a bit. The optional combat race mode lets you pick up much-needed energy boosts, as well as weapons and other goodies that you can use to take out your opponents. Of course, the AI cars can pick them up as well, so many races end up resembling high-speed mini-deathmatches.

As you compete, you’ll find that one extremely annoying problem with Re-Volt is the lack of a basic save game feature. True, your progress is recorded after you complete a championship circuit, and each circuit is typically only three or four races in length. But the developers should have recognized the fact that not all players can sit down and race through four tracks at a time every time they play the game. Saving mid-race would be ludicrous, but saving after each race should have been a no-brainer.

Re-Volt includes a track editor that lets you build your own courses. While I’m hesitant to criticize any feature that lets you extend the life and enjoyment of a game, unfortunately the editor is rather unintuitive and offers a paltry array of scenery and track-style options. In fact, it’s nearly impossible to recreate any of the pre-built tracks’ coolest jumps, twists, or slopes with this editor. Also, you can’t drop your track into any of the stunning environments that surround the game’s pre-built tracks. A few more options, a much better interface, and a way to create surrounding terrain would not only have improved the editor, but would have made it fit the look, feel, and style of the game. As it stands, the game and the editor feel like they’re two different products, not two parts of the same thing.

Don’t get me wrong, Re-Volt isn’t a bad game. It’s quite a lot of fun, in fact. It even has a great soundtrack, which is predominantly techno-dance music but very good techno-dance music and perfect for the gameplay. But the overall package is weaker than it should be as a result of its scattered flaws, which is unfortunate since it could just as soon have been one of the year’s best arcade racers.