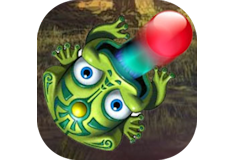 Zuma is easy to learn, and in case you’ve never turned on a computer or played this game before, allow me to elaborate: a line of colored marbles move along a twisting track towards a skull that’s eager to eat the entire string. You attempt to fire one of these colored marbles at a time towards the string and if you match three or more like-colored marbles, they disappear. If you time it right, you can create chain reactions that clear a large number of the string and gain time. What’s more, you’ll have a number of power-ups that you can collect, which will allow you to fire marbles faster, detonate sections of the marble string, slow down the string’s progress or even reverse it entirely. 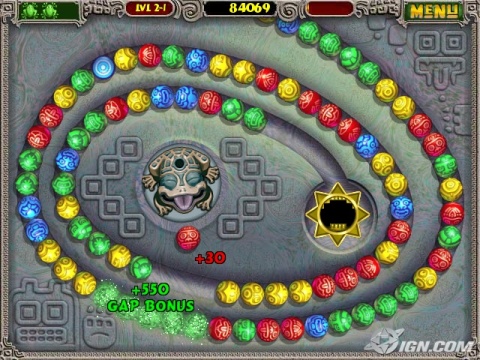 You can also fire marbles at coins that randomly pop up on each level, which add to a Zuma meter; once it’s filled, every marble on screen is thrown in reverse for around ten seconds, which can provide you with some breathing room if your aim is particularly off or the marbles start moving faster than you can keep up. Finally, as you fire one marble, you’re apprised of the next marble in your catapult, but you can always swap the positions of these marbles to help you eliminate strings with an easy button press.

Adding to the initial simplicity of the gameplay is the limited number of game modes that are available in Zuma. There are only two different modes that are found within the game, and the primary thrust resides in the Adventure mode. Here, you attempt to move through thirteen stages of varying lengths, attempting to clear each level of its marbles. You’re provided with three lives to start with, and you gain additional lives every fifty thousand points. At first, it might seem easy, but the farther you go into the game, the speed of the marble string increases, the number of marble colors in the string increases as well and the amount of time that a power-up stays on screen decreases significantly.

Adding to this difficulty is the fact that you’ll frequently find that the game will start to deny certain key colors that you need, and you’ll find that the challenge spikes dramatically in later levels, which will make you scream, yet consistently bring you back for more. It’s this curious challenge that makes Zuma so engaging. The other mode is what’s called Gauntlet, which places you on one stage that you’ve unlocked due to your progress in Adventure mode, and puts you up against a never ending string of marbles, tasking you with seeing how long you can survive until the marbles overwhelm you.

Again, these details really aren’t anything new, since the game hasn’t changed at all. While the control scheme on the PS3 isn’t nearly as accurate as a mouse is for a computer version of the game, the DualShock does respond better than the 360 controller — its analog stick is much more responsive than Microsoft’s controller, and doesn’t result in getting stuck as you rotate around to aim at a string, which could happen in the 360 version. As a result, it’s a bit easier to aim and fire with this controller, which can help you when it comes to collecting the ten Trophies that Zuma comes with. While it’s a bit tricky to collect all of the Trophies (for example, completing Adventure Mode is extremely difficult, yet will only earn you a silver trophy), you’ll find yourself collecting a number of these by just playing the game, which is rather nice.