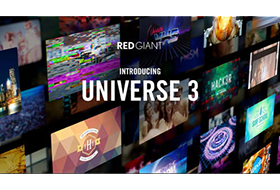 Universe 2023 provides improved support for alpha layers in Avid Media Composer and over 100 new presets for the Generators category. We’ve not only expanded on the selection of beautiful background imagery available, but we’ve aimed to highlight further capabilities of these tools you may not have realized were possible such as overlays, light leaks, lower thirds, and text strips.

Transitions and Effects
Build fast, unique transitions with little or no work. Add glows and other effects that give you better results and more shortcuts, options and control than anything in your host app.

Open GL
All of the Universe plug-ins run on the GPU, making them incredibly fast.

*Prism Displacement, Compound Blur, and Picture in Picture are not supported in Avid Media Composer